Girls and Guns: How Many Women Gun Owners Are There?

Last summer, before the tragic events at the end of 2012 brought the media’s attention to gun ownership regulations, a growing number of women were becoming gun owners. Gallup, longtime research provider, revealed that as little as 1 in 10 women owned guns less than a decade ago. Approximately 1 in 4 women are gun owners in America today, which equates to over 15 million women.
The differences in physical strength between men and women make certain guns more attractive than others. When it comes to comfort, lightweight carbon options and grips designed for women’s smaller hands are just a few of the ways gun manufacturers tailor to the female firearm market. Gun manufacturers market to women in a variety of other ways: Fashionable holsters, decorative grips, bags and apparel. Pink is a popular shade on guns and gun-related products for women. Several designers and brand names have partnered with gun manufacturers, tapping into a woman’s brand loyalty as she chooses her first gun or grows her gun collection. 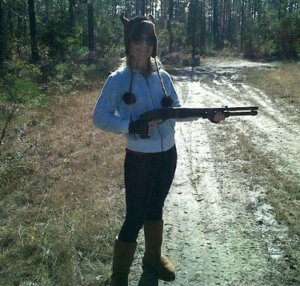 Why are more women making a lifestyle change to gun ownership? The three common reasons are:
Most women gun owners cite protection as their top reason for owning a firearm. Pictured here in North Carolina, gun owner Holly Tucker spends a day learning how to use her gun with her friend’s father, a gun aficionado. Her uncle has also given her countless pointers. Tucker, Vice President of SunTrust Bank in Durham, owns her gun for defense purposes. Many women are learning the importance of responsible gun training. Dame Magazine reported just a year ago that the NRA’s shooting program designed for women enrolled 500 students in 2000. Just a decade later, 9,500 women signed up for their event. Knowing how to use a gun is empowering. Tucker’s uncle collects guns as a hobby and educates her on safety for having a gun at home. He tells her: “Most people only need to hear the sound of the gun cocking to get the message!”
Tom2017-03-16T20:34:06+00:00