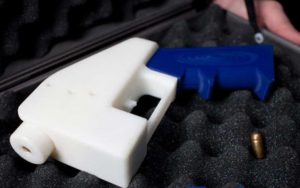 After many rounds of prototypes, the design files for the world’s first 3D printable handgun were made available online. The 3D printable gun design, The Liberator, was downloaded over 100,000 times in less than 48 hours. Internet users in the United States were among the majority of people downloading the designs, however Brazil recorded more downloads than any other country.

In the short time the files have been made public, the United States government issued an order for the 3D printable gun design to be removed from the Internet. However, the files have already been made available on multiple file sharing sites that are challenging, if not impossible, for law enforcement officials to moderate effectively.

The request to take down the weapon files has been made before proposed gun laws addressing 3D printed guns have been passed into law. In some states, requests for immediate law changes were made. For now, it is currently legal for US citizens to make their own firearms; a 3D printer and gun design files would be another means for individuals to create guns.

A few problems with 3D printed guns are that they are untrackable and they don’t show up in metal detector security systems. During the first week the designs were available, reporters allegedly smuggled a 3D printed handgun across international borders. According to reports from Forbes, the reporters did not travel with the gun completely assembled, which has opened the argument that smuggling an unassembled weapon is not a full threat. However, it still poses possibilities to lawmakers to address as they prepare gun laws.
This is only the beginning of the Digital Age of gunmaking. The laws that develop in the coming months will likely need to be amended as technology continues to develop. State and federal gun lawmakers will take time to react to these changes. Responsible gun owners should keep an eye on gun law changes on their state level to make sure they are in compliance. For updates on Florida, Tennessee and North Carolina gun law changes, follow Southern Gun Law Group on Twitter and Facebook.
Tom2017-03-16T20:42:38+00:00