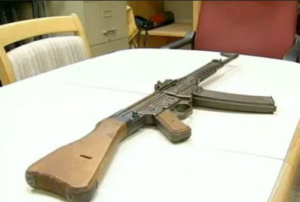 Gun buy-back programs at police stations offer $50 to $100 payouts for the surrendering of firearms. The programs, held at local police stations around the country, are offered in an effort to keep unnecessary firearms off the streets. Without gun trusts or other precautions, the transferring of firearms could leave the former owner and the new owner in unintentional criminal violation. Gun buy-backs are a safe way to end ownership of a gun. Each gun is assessed to see if it matches bullets from crime scenes or if it is included in a stolen gun registry.

One of these buy-back programs attracted a woman whose father had left her a World War II Nazi Assault Rifle in an inheritance. She was given no record of the gun’s historic value, and brought it to her community’s police station for their gun buy-back program. Upon bringing in the gun, she learned it was the first modern assault rifle ever created called a Sturmgewehr 44, valued up to $25,000.

Although the gun was inoperable—and ammunition must be specifically made for this model—when in usable shape, an ABC News Blog cites the “German-made machine gun can fire 500 rounds in minutes.” The valuable WWII rifle is the type of artifact one would find in a museum.

The police officers have chosen not to accept the rifle for their gun buy-back program. Since all guns turned in through the buy-back program are dismantled and melted down, it would have to be destroyed. Now, the owner is selling the rifle privately.